Posted on 31st January 2022 at 09:34
Lobsters are one of the great delicacies of the sea. The king of shellfish for many people, lobster makes for the perfect dinner party centrepiece or romantic dinner treat.
Many people don’t realise that native lobster, the ones we find in the UK, are blue in colour when alive; they only turn red once they have been cooked. Lobster has a beautifully delicate, subtle sweet flavour which is unlike anything else.
Lobster benefits from simple cooking: let those delicate flavours shine through with butter and lemon. In this recipe, we have combined lobster with another shellfish favourite – crab – to make the perfect crab cakes.
For this recipe, you can use either Adela king crab or brown crab, and for the lobster, a choice of native lobster and spiny lobster – simply ask what Tristan has available that day. 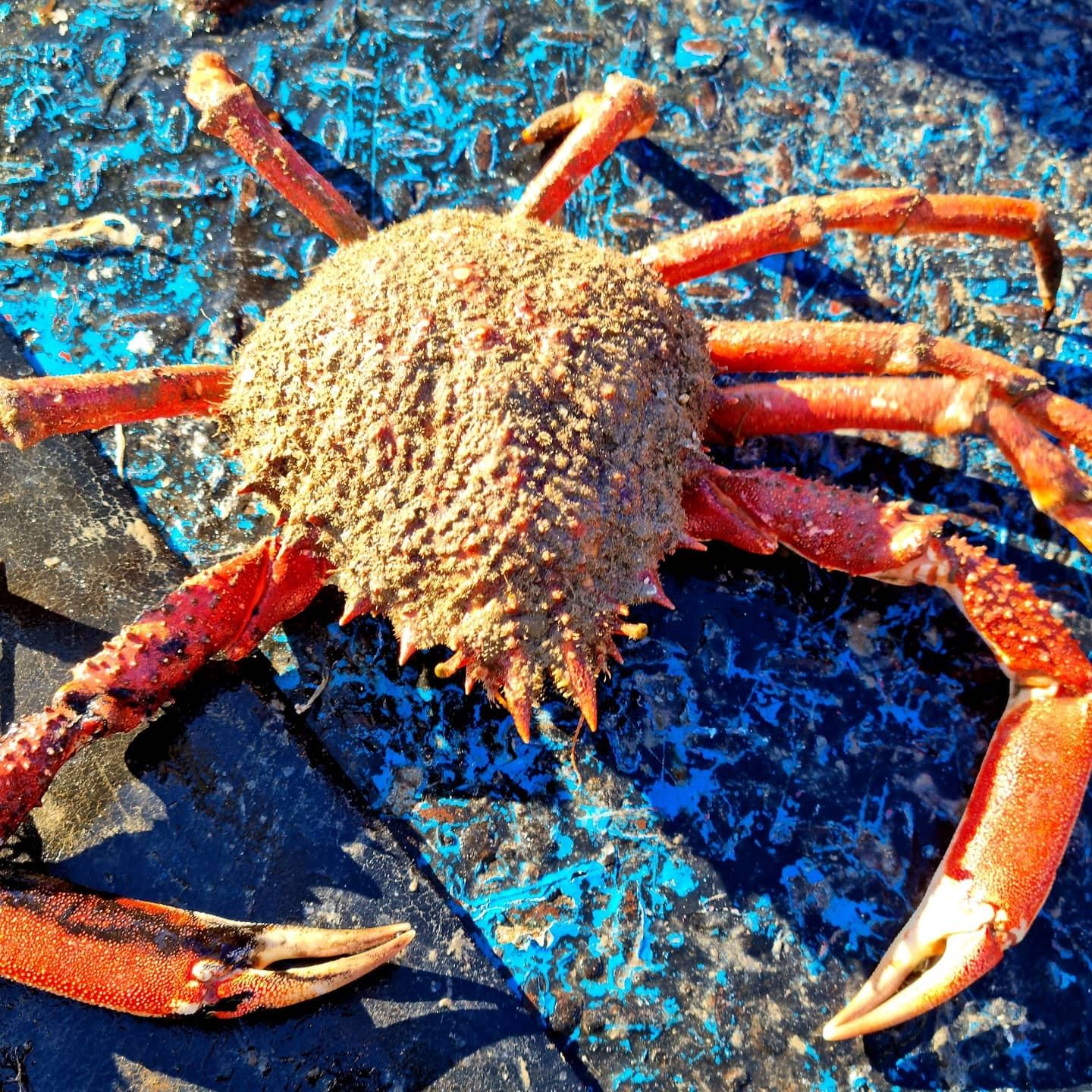 For the lobster and crab cakes

For the lemon mayo

Cooking your crab and lobster

You will need to cook your crab and lobster in their shells and then prepare them to make sure they are ready for use in the crab cakes. Crab and lobster are cooked and prepared in much the same way, but if you are unsure there are plenty of videos online. Have Tristan kill your crab and lobster on the day you buy it and for the best results, cook it that day. 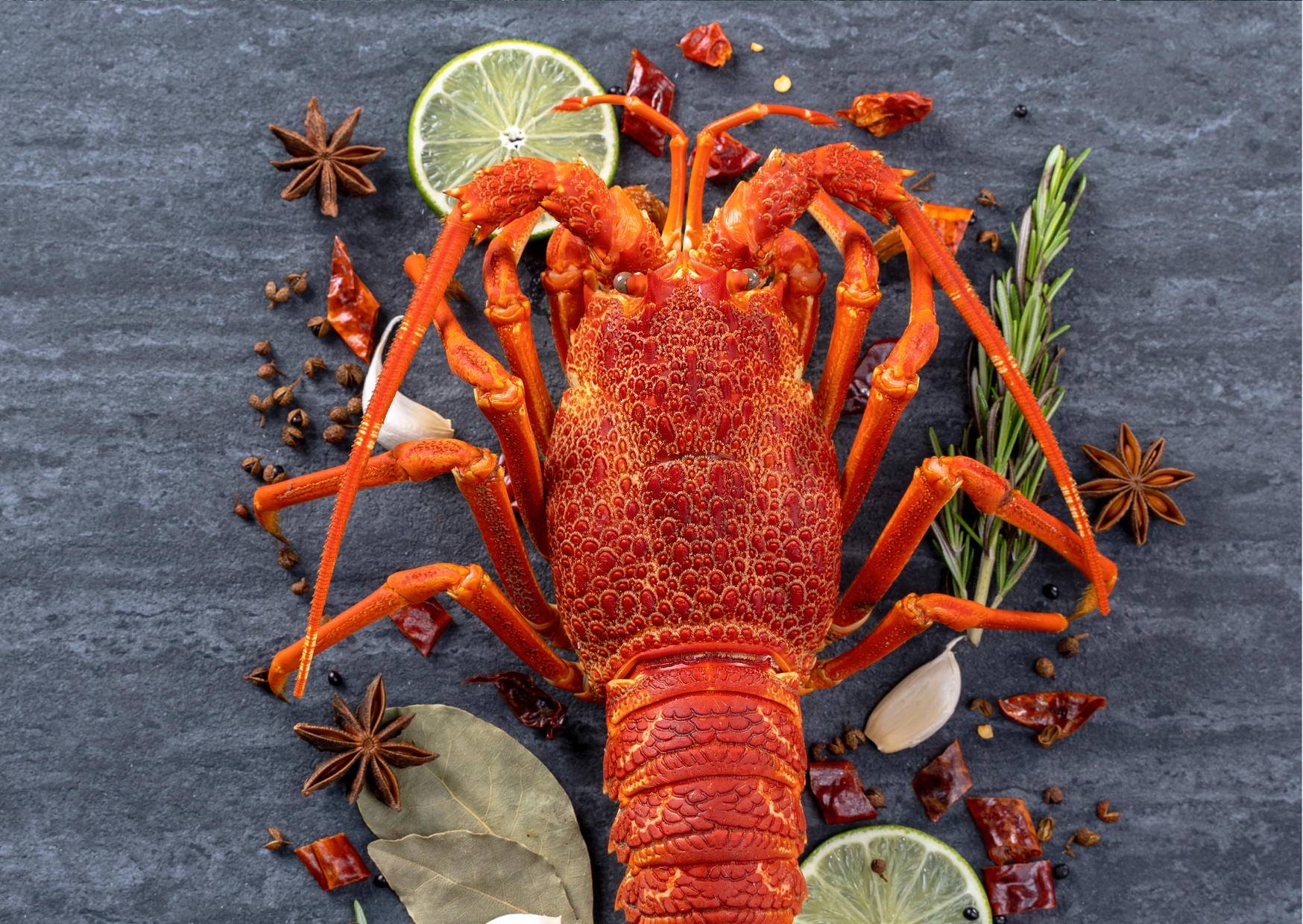 Set a large pan of water simmering. You will need to boil the lobster for around 5 mins. You can simply cook the crab in the water for around 10–12 mins per kg. If you want to be a bit fancier, you can use a court bouillon which is a simple stock find details here.
Once the lobster is cooked remove it from the pan and leave to cool in a bowl of ice water. This will stop the lobster from becoming over-cooked.
Leave the crab in the pot to cool until cold. This allows the crab meat to relax and also reduces the chance of you burning yourself during the next stage.
Removing the crab meat
Once cold, remove the crab from the pot and place it on the counter on its back with the legs up to you. Twist off each leg in turn placing them to the side.
Turn the crab so the eyes are towards you but it is still on its back, then using your thumbs push away the purse – the central body part.
You should now see the grey feathery gills called dead men’s fingers. It is crucial to pull these off and discard them. They should not be eaten.
Then, using a heavy knife, cut the round purse into four. This exposes the white meat, which can be picked out.
Pick the meat out of the legs with a skewer or small knife. If you a struggling you can crack the legs in half using a tea towel and then slide the meat out.
Put all the white meat in a bowl, carefully checking for bits of shell as you go.
Using a teaspoon, scrape out the brown meat inside the main body shell, both soft and hard. Place in a sieve and rub through into a bowl using the back of a wooden spoon.
Put both the brown and white crab meat in the fridge until needed. 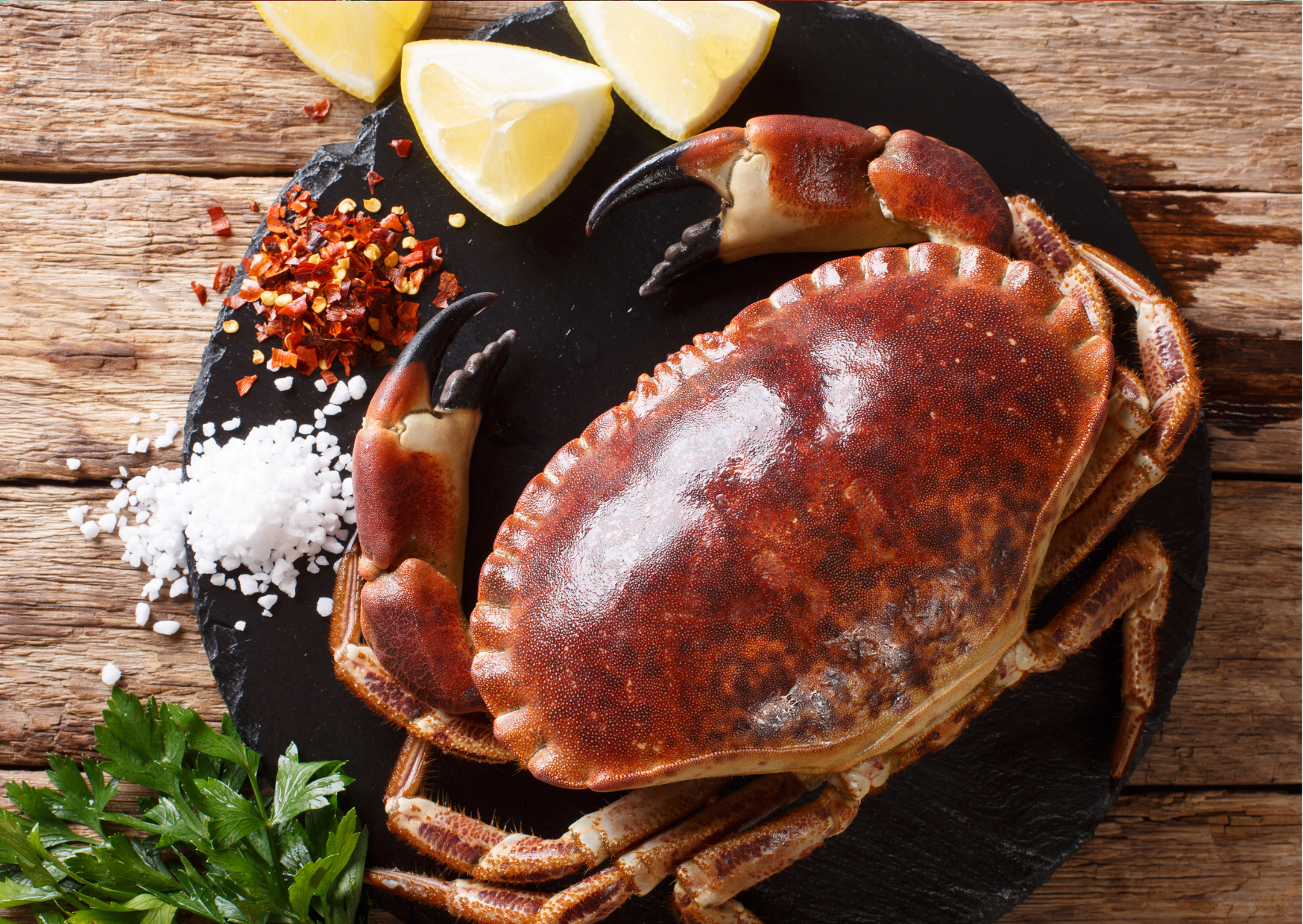 Removing the lobster meat
Start by removing the claws from the lobster by twisting them at the point where they meet the body. Remove the rest of the legs in the same way.
Separate the head from the tail by twisting the two sections in opposite directions.
To prepare the claws, snap them into their separate sections but keep the large part of the claw and both pincers whole.
Pull back the smallest pincer until it snaps off then pull it back. Don’t forget to save any pieces of meat that are attached.
To extract the rest of the claw meat, give the shell a sharp, gentle tap with a heavy item like a rolling pin. You just want to crack it, not smash it. Do this on both sides then peel the shell away.
Use a lobster pick or skewer to pick out the last pieces of meat from the shell.
To take the meat out of the legs, use a rolling pin to firmly push it out.
To prepare the tail, either split it in half or, using a pair of kitchen scissors, snip down the length of the shell on either side of the legs on the underside of the lobster. Peel away the shell then remove the digestive tract by cutting the tail in half lengthways and using a skewer or lobster pick to lift the vein out.
Put the lobster meat in the fridge until needed.

For the mayonnaise, place the eggs, white wine vinegar and mustard into a food processor and blend until pale and creamy.
With the motor running, pour in the oil, in a slow steady stream, until the mayonnaise is thick (you may not need all the oil). Mix in the lemon juice.
Taste and adjust the amount of lemon juice and salt if necessary.

Making the lobster and crab cakes

Melt one tablespoon of the butter in a small saucepan and sweat the pepper, spring onion and celery until soft; about five minutes. Allow to cool and then place in a bowl.
Mix the lobster meat and crab meat into the now cooled celery/butter/pepper mix.
Add the egg, herbs, mustard and 100g of the breadcrumbs. Taste for seasoning and add salt and pepper if necessary.
Roll the lobster/crabmeat mixture into balls just a little larger than a golf ball and dip in the remaining breadcrumbs.
Finally form the balls into little cakes by pressing them down lightly.
Melt one tablespoon of the butter in a large frying pan with the vegetable oil. Sauté the lobster and crab cakes over a moderate heat until nicely golden and heated right through. This will take about 3–4 minutes on each side (depending on thickness).
Drain on kitchen paper
Serve with the lemon mayo and some green salad leaves.